Logos Hope’s technical crew knows maintenance is a ministry. One the one hand, they are on board using their skills to keep the ship functioning. On the other, they’re also alert to the unique opportunities this work provides them to share the Gospel.

The Logos Hope team had built a good rapport with local contractors in Buenos Aires.  On their final day, on the ship’s outer deck, an ‘asado’ barbecue was grilled up for around 20 of the Argentinian welders and fitters who helped with steel repairs to the vessel.  As they tucked into various meats cooked in the traditional way – a feast crewmembers have particularly enjoyed as part of their exposure to Argentine culture – the ship’s plumber, Carlos Alarcon (Argentina), shared a message from the Bible.

“I spoke about Jesus telling us that He is the vine and we are the branches,” says Carlos, who also comes from near to the capital city. “I explained that we operate in His strength and He is the only source of true life and growth – apart from Him we can do nothing.”

The local workmen were presented with gifts from Logos Hope, including a Bible and keychain each. One welder told the team he had recently been able to buy a car, which he considered a great blessing from God. He said he would hang his car key on the new keychain, as a daily reminder of God’s ship, that he had worked on.

“They really liked our ship,” says Harald Smit (Netherlands), OM Ships’ technical manager. “These people work on different vessels in port all the time, but they told us this was different: our crew was friendly and welcoming; nobody barked orders at them in a pressured way, as can happen on commercial vessels.”

The days they spent repairing Logos Hope gave the workmen an insight into the ship’s mission. They noticed thousands of people queuing to visit and were appreciated by the crew since their input was enabling the vessel to continue as a tool for God.

“It’s all part of what we do; reaching out to whomever we encounter,” says Harald. “Sometimes volunteers in our marine operations roles may not think they have as many opportunities to connect with the public visiting Logos Hope, but here we saw again that the Lord brings people on board who need to hear about Him and we minister right where we are, in whatever we are doing.”

The country is going through a difficult time as inflation is beyond control and the situation is unstable. Pray as elections are coming up in October and they are expected to be complicated. In this context, more non-Christians are attending the Sunday services. People coming to Christ are helped on by keen Christians who keep in contact with them. Pray for many more to find hope in God at this tumultuous time.

IFES movement in Chile recently employed Pablo as staff in Punta Arenas to support student ministry there and, working with the Argentinian movement, to pioneer across Patagonia. In January, Pablo and a team travelled 4000km around Argentinian Patagonia, making contact with many believers, including Matias, soon starting university in Comodoro who is keen to start a group there. He organised a meeting to encourage believers to start Christian groups on campus, and his friend’s non-believing girlfriend came. Pablo writes: “It wasn't the most appropriate place, maybe it wasn't the most appropriate talk for a non-believer, but that young guest gave her life to Jesus. It was not within our plans, but God is full of grace.” Ask God to continue to draw students to him across Patagonia.

Argentina has a growing, troublesome import: cocaine. For the first time in its history, drug trafficking has become a major problem. The nation has become the fifth-largest transit location for cocaine to Asia and Europe. Drug use among Argentinians has at least doubled over the last two decades and, in the hubs for shipment, murder rates have rocketed. The church is networking to address the issue, collaborating with government initiatives and battling the problem with prevention programmes and rehabilitation centres. Pray that these collaborations would bear fruit and that there would be freedom from this stronghold in Argentina and beyond.

The flooding of the Pilcomayo river this spring has affected Salta and Formosa provinces in Argentina. The river burst its banks in extensive areas, leading to a massive evacuation of over 12,000 people. A local bishop commented in the midst of the crisis, “Our brothers don’t know what to do... they are very shaken... 50-60 houses have collapsed.” But another church leader summed up the feeling in many of the communities: “We are thankful to be alive.” One member of the community, after travelling through difficult conditions to lead a church meeting “expressed his gratitude to God that there had been no loss of life and asked that we pray for them as they decide where and when to move and begin rebuilding their community.” Please pray with us for local communities and churches as they make decisions about the future, especially around returning and rebuilding.

Without a doubt, the greatest strength of students in Latin America is their initiative to be involved in mission. ABUA Argentina have been looking back at their beginnings, and thinking about how best to equip students to pass on the ministry baton. Pray for God’s wisdom for this and future generations.

May 2015
A fragile environment

Seeing the destruction of vast areas of forest is bad enough; knowing that this is driven by greed and corruption makes it worse. But what is truly gut-wrenching is witnessing some indigenous leaders speak in favour of the expansion of industries into their homelands as a result of being offered gifts. A key role for Christians in caring for the Chaco region’s fragile environment and its people is speaking the truth in love and facilitating dialogue between those who control environmental policies, those who destroy the forests, and those who are most affected by those actions. Pray for a new venture with A Rocha to develop a centre helping Christian leaders and environmental professionals to integrate their faith into their work and ministries.

There has been amazing numerical growth in the Evangelical Church in Latin America in the past 50 years, from around 23 million in 1970 to 228.5 million in 2010. There’s also been incredible growth in the Latin mission movement: there are now about 18,000 Latin American mission workers worldwide. Sadly, many return home before time due to lack of finance and inadequate training. Pray for organisations such as ProMETA, which is developing into an online university offering five Masters programmes to help give mission workers the tools to be successful in a cross-cultural situation.

Pray for those addicted to drugs or alcohol. Praise God for a ministry of hope in a small house in Tartagal called ‘Clamor en el Barrio’, where pastor Martinez, himself an ex drug addict, is helping six young men break the habit of drug addiction and discover new life in Jesus Christ. Members of the church of the Good Shepherd help this work with regular gifts of food and other necessities. Pray for this and other similar ministries across the country.

July 2014
The purpose of success

In April, over 80 evangelical churches in Salta worked together on a week of outreach events. Salta is a very ‘religious’ city – a bastion of traditional Roman Catholicism. Evangelical faith is seen as something for the poor; the middle and upper classes have barely been touched by the gospel. Therefore, before the main open-air festival, several events were run targeted at the ‘higher’ levels of society. Over 1,600 ladies attended a ladies’ tea where there was live music, a powerful testimony, and then a clear explanation of the gospel. There was also a dinner attended by over 650 businessmen and professionals with a message on ‘The purpose of success’, pointing to the need for spiritual success before looking for success elsewhere. Give thanks for the thousands of people responded positively to the gospel during the week and pray for the important follow-up work and discipling.

Since 2008, Salta authorities have authorised the clearance of approximately 840,000 acres of native forests (roughly the size of Essex). 28% of that has been in areas where deforestation is prohibited by law. Last year ended with a barrage of deforestation projects being approved by the Salta government. In some cases landowners are even bribing indigenous people to support their proposals for deforestation. The Christian conservation group Land for Life (Refugio) have presented at public hearings at different locations across the Chaco region but they and others are often left asking if what they are doing is worthwhile as more and more land is being given over to deforestation.

Last year thousands of people responded to an evangelistic campaign led by Carlos Annacondia and his team. CMS Mission partners are involved with local churches in the follow up and ask for prayer. “There’s a general feeling of gratitude to God for all that we have been able to witness and a desire that every effort should be made to build on the level of confidence and cooperation which has grown among the Christians of different churches over the months”

On the night of 2/3 April over five-months-worth of rain fell on Buenos Aires and La Plata in the space of three hours. The resulting floods killed at least 80 people, although the actual number is probably much higher. Natural disasters bring such suffering and trauma yet behind the devastation there is hope. One church in La Plata responded to the disaster by quickly becoming a reception area for clothing, blankets, mattresses, and food. With the help of 300 people from other churches they cooked over 1,000 hot meals in a single day. An army of young people emerged, cooking food every night, distributing clothes and looking for other ways to serve. Pray that the churches in La Plata can sustain what they’ve begun and continue to make a major contribution to the poorer sections of society.

May 2013
Pope Francis the First

On 19th March, Cardinal Jorge Mario Bergoglio from Argentina was officially installed as Pope Francis the First. He is ‘the first’ in many ways, being the first Latin American pope ever appointed, the first pope from outside Europe in over 1,000 years, and the first to take the name of Francis (indicating his priority of living simply and ministering to the poor, like Francis of Assisi). Some have suggested that the challenges facing the newly appointed pope would be better tackled by a younger man (Bergoglio is 76 years old), but overall responses have been enthusiastic and hopeful, from both Roman Catholic and Protestant perspectives. Let’s pray for him.

Please pray for the many changes which are going on in the world surrounding the Amerindian communities in Northern Argentina. Nationally the emphasis on mining and crop production is threatening subsistence cultures. ASociANA (the Social Accompaniment group linked to the Anglican Church) works closely with lawyers and NGOs to help the communities monitor and respond to this situation, whilst the charity Land for Life tries to focus on the bigger picture of environmental change. Please pray for people living in this region as some of the outcomes of ‘development’ have had adverse effects locally. For example, engineering work done in recent years has upset the ecological balance with regard to fishing. With communities depending on fish to survive, even changes that make them easier to catch can have serious long-term consequences.

Organisations with connections in Argentina 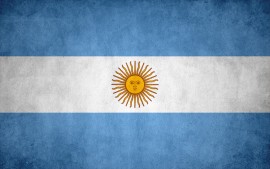